I recently submitted work to the Early Works Project. It is a photography show based on images you took as a child, as well as short narratives about how that image is important to you as a photographer. It doesn’t have anything to do with what I’m currently making or thinking about, but it seemed like a fun project. Unfortunately I didn’t get accepted, but it was really enjoyable as an exercise to look back at 6 year old photographer me and see what I was drawn to. So, despite the small amount of disappointment, I wanted to share the 3 shots I selected and what I wrote about them.

My brother in a hotel on the first morning of vacation – Colorado, 1996

This shot was taken on my family vacation to Colorado in the summer of 1996 when I was 10. The rest of the roll was filled with typical Rocky Mountain scenery, but this photo of my brother in our hotel was only taken because it was the first of the roll and I was never certain whether or not the first picture on a roll would turn out. I love this shot because of the nonchalance with which it was taken. There is nothing arranged, posed, or even intentionally communicated; it is simply a record of what was. However, it does manage to reveal some of the relationship between my brother and I at the time. He is 7 years older so we were never very close growing up, but he was in many ways a hero to me. This photo shows that reverent watchfulness of my youth directed towards the person I most wanted to be like.

This shot memorializes a snow day viewed from my bedroom window looking towards the back yard. Growing up in New Jersey, snow days were a sporadic blessing that granted freedom from school work, hours of play in the snow and even a financial influx from shoveling. Depending on the year we could get several days off from feet of snow or mere dustings, taunting my friends and I with a wintery coating without the freedom that made it so enjoyable. I can remember many times of staying up later than normal, watching the weather report in hopes of some fateful prediction of “worsening” weather (as if that wasn’t the very thing we were all secretly wishing for). At times when only a few inches were in the forecast I would wildly concoct scenarios that would still require a school closing: my principle not being able to get out the driveway, buses not being able to start in the cold, or reports of dangerous black ice on the roads. Then the next morning I would wake up early, run down to the radio and turn on KYW, desperately listening for my school closing number to be called. On the day in this photo my dreams came true and I was left with the gift of freedom from daily routine, which in retrospect seems entirely worthy of a documenting photo. 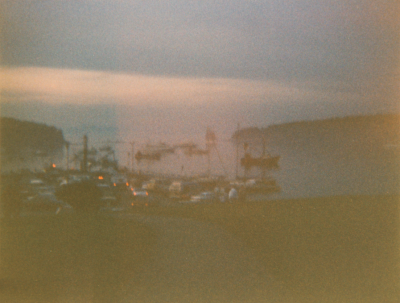 This landscape of a harbor at dusk was taken by me when I was 7 with the first camera I ever had. It was a children’s plastic disposable model that used 110 film and had a little flip up square on top to use as a viewfinder (which I apparently had a hard time using judging by how most of my pictures barely have the subject in the frame). The vacation to Nova Scotia was filled with typical picturesque lighthouses, rocky shorelines and many hours of road trip family bonding. But this picture captures a fleeting moment of the last colors of the day sinking past the world’s western horizon. The film grain typical of a tiny negative combined with the low light conditions occlude much of the visual information, but this photo manages to successfully describe the magical quality of dusk over a quite harbor that must have caught my 7 year old eyes. In this case I think photography serves as a way of describing and remembering what otherwise would be a forgotten intangible moment, a characteristic that continues to inspire me in my practice.